The function of the immune system is to protect the body from outside organisms and substances that may harm it. It should be no surprise then that mucus membranes lining all the portals of the body open to the world have high immune capacity. The most important of these is the digestive system. 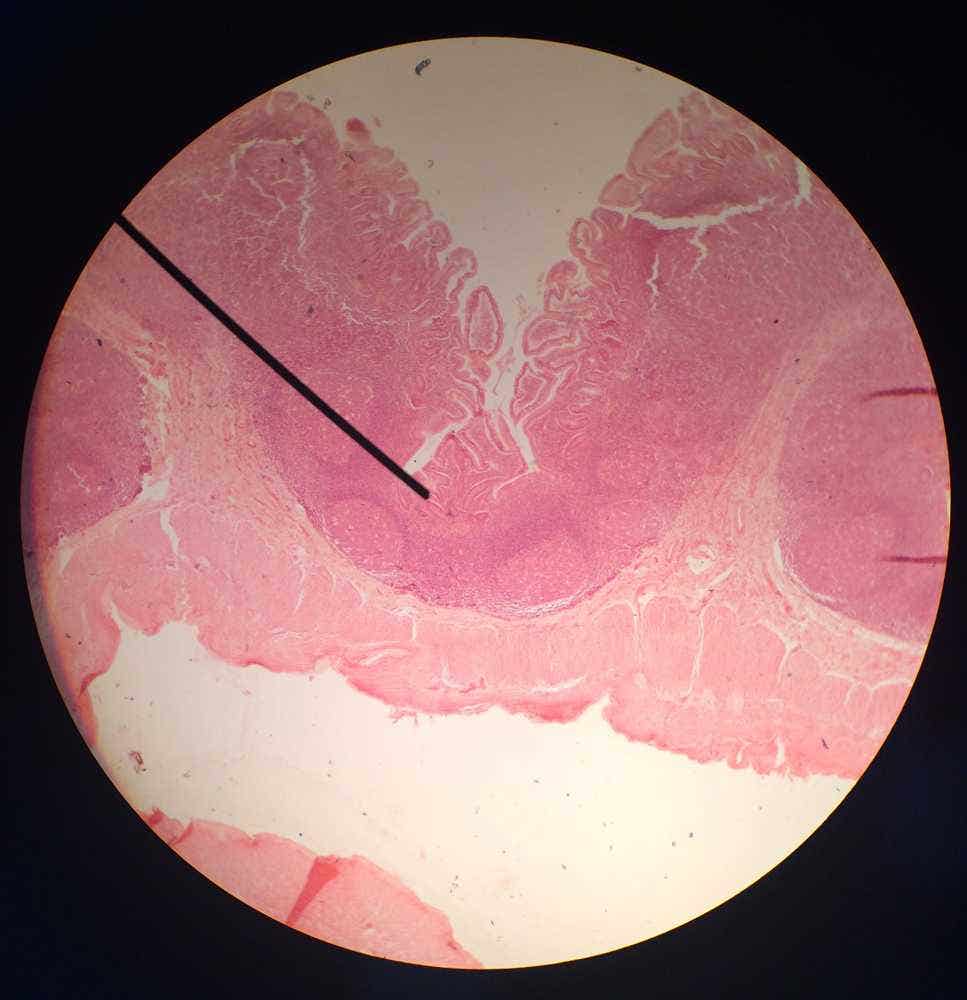 Microscopic view of Peyer's Patches lying under the lining cells of the small intestine.

Microfold cells, or M cells, are located over collections of lymphoid tissue along the intestinal tract. The M cells reach out to engulf bacteria and other material from the intestinal tract then pull it inside and present it to immune system cells. This material is processed through T and B lymphocytes, eventually resulting in the production of IgA antibodies, which remain in the local tissues to protect them. However, it doesn't stop there.

The lymphocytes that will eventually produce local IgA antibodies are released into the bloodstream before they come back home in the intestinal lining again. In the process, they can share this information with the entire body's immune system so that the rest of the body can produce circulating antibodies (IgG, IgM) to the same organisms the local IgA targets. A good example of how GALT interacts with the rest of the body is oral vaccines. Several human oral vaccines have been developed, including against polio and malaria. Oral rabies vaccines in bait have been used to successfully battle rabies in wild animals.

Research has found that interactions between the immune system and the bacteria colonizing it can have profound effects. Probiotics are defined as bacterial strains capable of colonizing and surviving in the gut which has a beneficial effect on their host by suppressing the growth of harmful bacteria and interacting with the immune system.

Documented effects of probiotics to date include directing the activity of immune cells, encouraging the production of protective mucus, reducing inflammation, and increasing the production of IgA antibodies, which in turn decreases the risk of allergy-related IgE antibody forming.

The diet itself plays a major role in the health of the intestinal tract and the beneficial probiotic strains inhabiting it. Quality hay free of mold and other easily fermentable dietary ingredients like beet pulp feed these beneficial strains. Special complex carbohydrates from yeast cell walls or plant arabinogalactan are potent immune simulators. Avoid overfeeding of grains as this can bypass small intestinal digestion to upset the balance of organisms in the hindgut.

In summary, the intestinal tract is a major player in the immune system. It has been estimated that 70% of the body's immune system cells originate there. Immune activity in the gut has a body-wide effect. One of the best ways to boost and balance the immune system is through the oral administration of probiotics, prebiotics, and other substances documented to support and balance immune function.